What a weekend. The sun was shinning. It was hot. It was dry and we now have a playable golf course with cups in the ground.

How ignorant we were at 11:00AM Saturday morning. Here we were talking about the plan of action. Simply wanted to till the greens and tees a few times and flatten the dirt. Nothing crazy. Ignorance is bliss, folks: 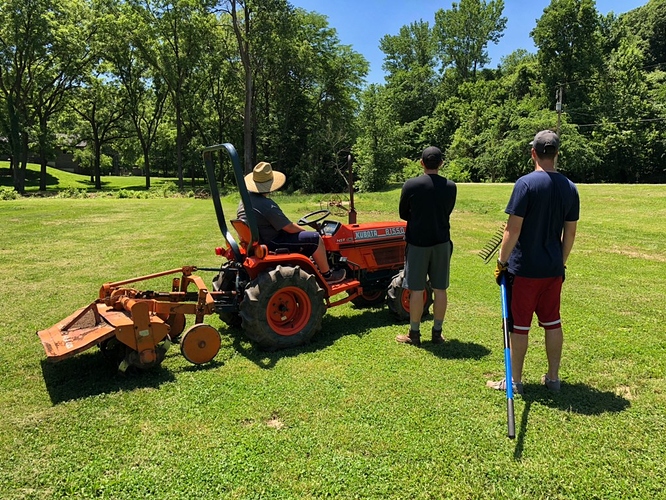 We started on the Biarritz. It needed a full refresh. Here is what we were working with after the first time through with the tiller: 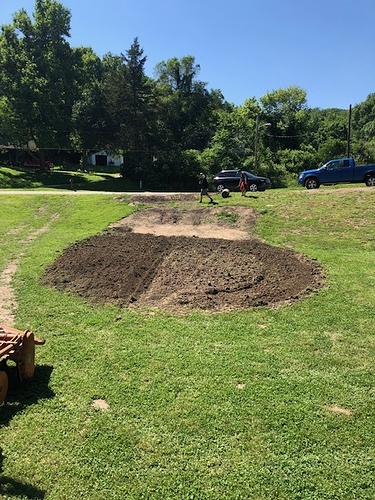 After a second till, clean up and quite a bit of flattening with Landon’s (BCN member donation) (in)famous roller: 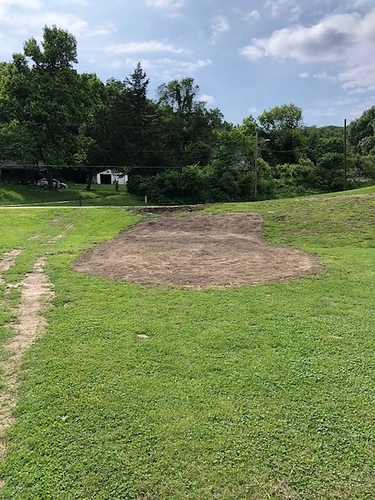 This green is so FUNKY. Pitches left to right quite a bit. Works like a charm. Believe we nailed the “naturalism” element of this green – using the natural slopes and simply exaggerating the contours: 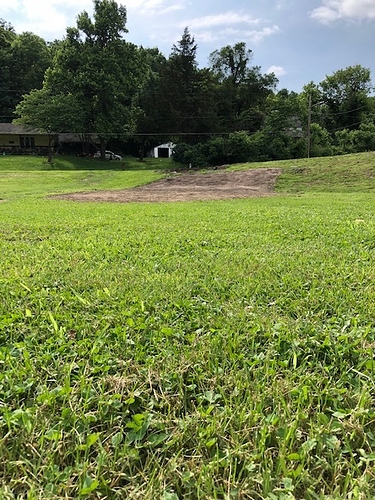 Road Hole before – notice how quickly the vegetation came back after the first till 3 weeks back. Ended up being the biggest challenge of the weekend: 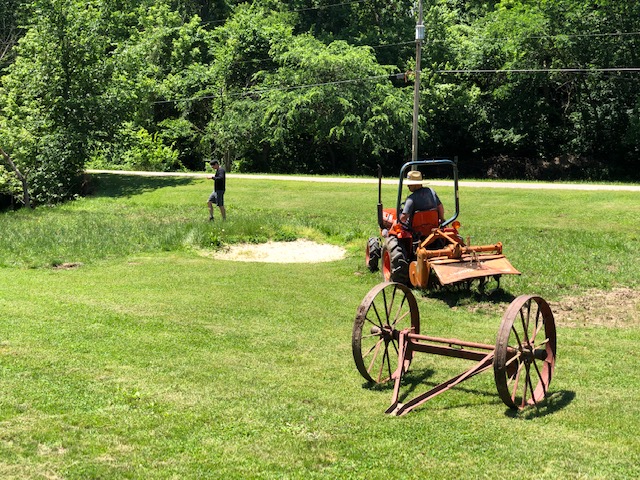 Road Hole right after the second till, mid first role: 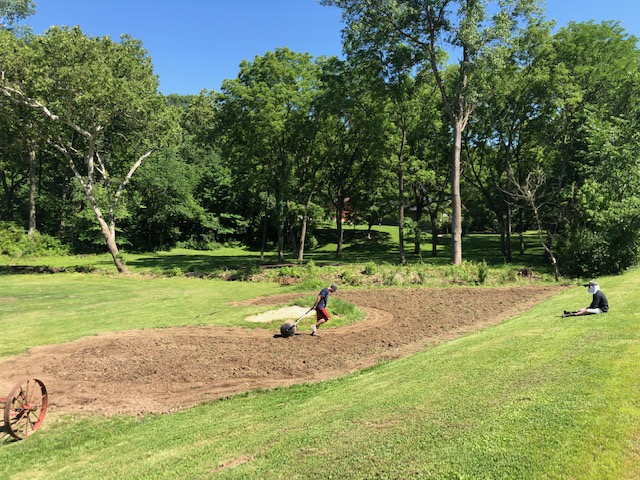 This green was an SOB. We got a little system going where the four of us would switch off with the roller every lap around the green. Multiple times we had near pukers in the 90 degree heat pulling around this 300 lb roller.

Vegetation and turf grass grew back strong after the first till a few weeks back. It was super bumpy with knobs and holes all over the green even after the double till and multiple rolls. This is no good for sod as air pockets are a sure fire way to lose your sod. The vegetation was to blame. We spent a solid 2 hours raking, shoveling and picking out turf from this green in hopes to have a flatter, more consistent green.

Here is the result. First pic before a second round of rolling: 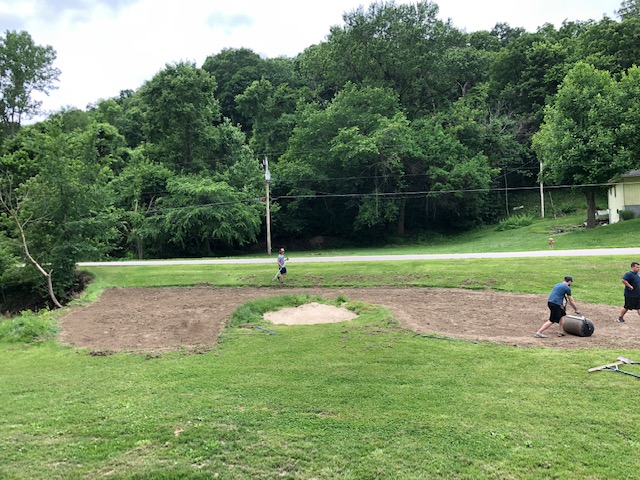 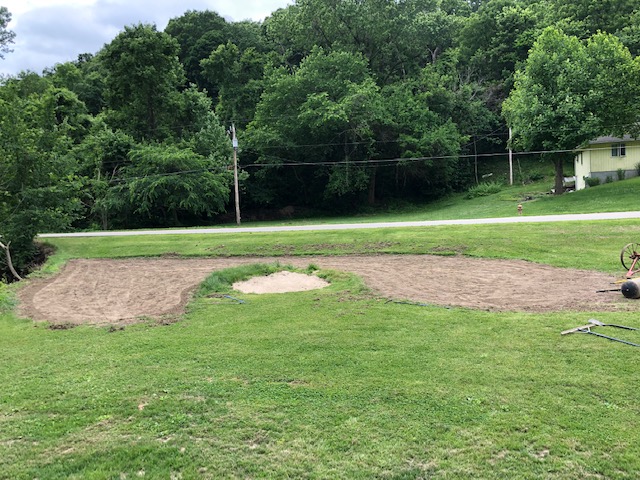 We made some changes to the shared green 1 and 7. We connected the teeing area for 2 with the green and expanded it closer to the Icarito bunker. Expanding was done to provide more options and hopefully more visually intimidating. 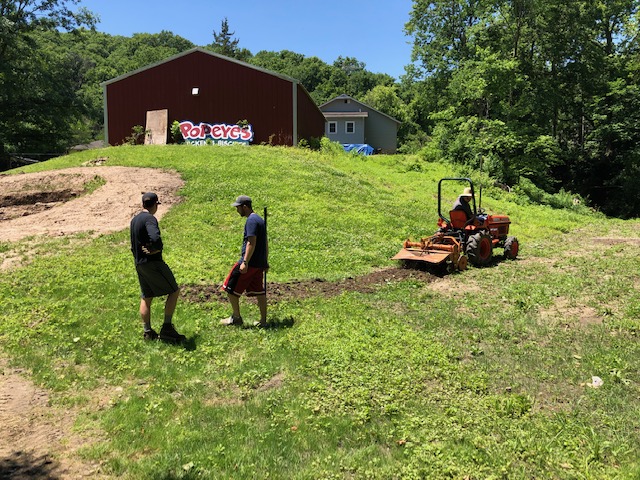 Post till of our boomerang green. Tee for the 2nd hole right above Evan’s head in this pic: 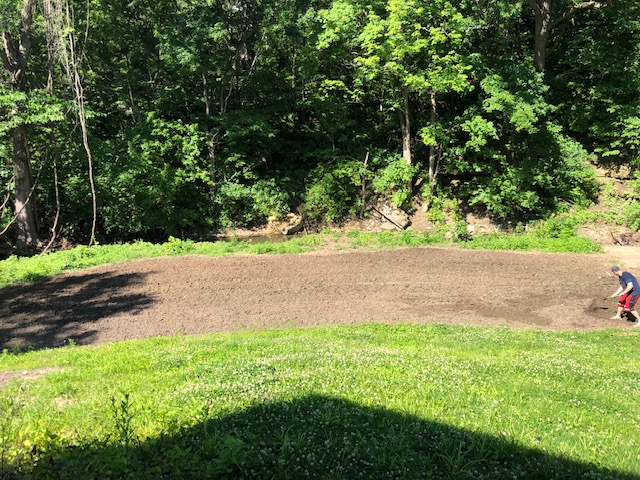 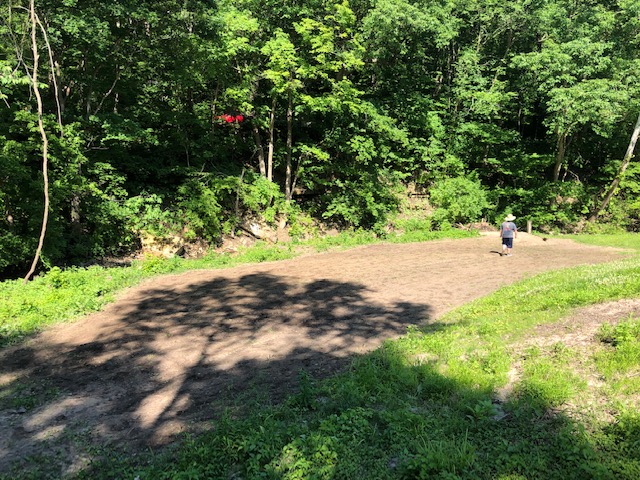 Ground view after a rake and handful of rolls: 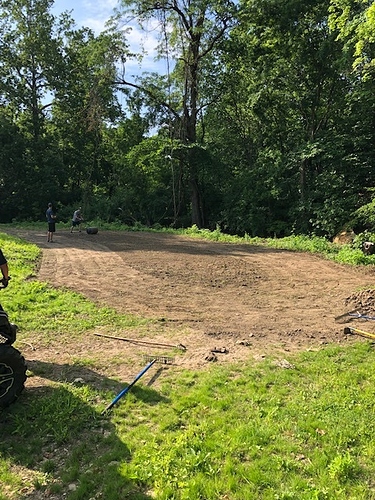 I’ve been very nervous about the 3rd hole (Golden Bell) after the floods. The ground was exposing some rocks and the soil was packed super hard. It took many goes through with the tiller, but we whipped it into shape. Basically the soil was so compacted and reinforced with roots (this green area was full of overgrowth and bushes previously) which basically made the ground reinforced concrete. The tiller dug deep and flipped the soil on itself while ripping up the roots. So much more confident the grass will grow after letting this soil breathe!

Shout to Zach for getting to work rolling this one before we all got there on Sunday. 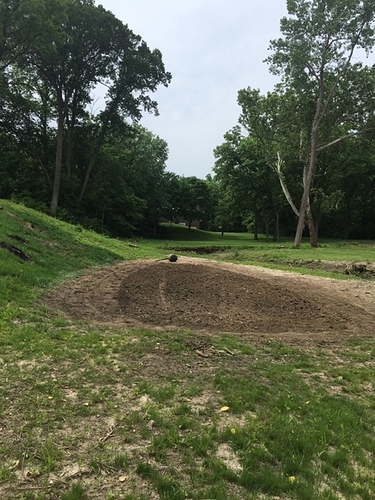 Now we go up to the Redan. This process was so fun and certainly saw the most human intervention to get the slopes and bowl how we wanted it.

Zach – doing what he does on the tractor (used the OG one as the new one is getting it’s post few hour tune up): 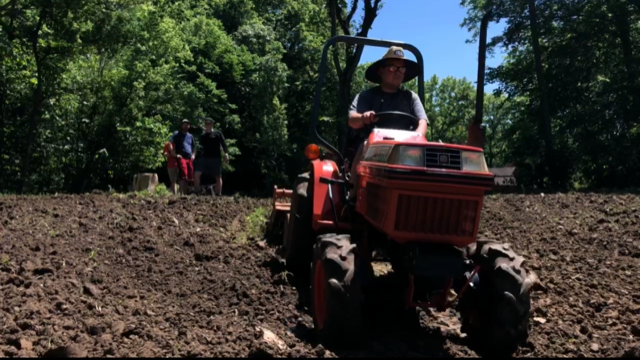 The Redan kicker was fairly jagged and didn’t have much flow from front of the green to the back. Drainage was a huge factor and we wanted the ridge to play more in the center of the green with a backstop that funneled balls back to the cup. Basically if you are on the left half of the green and do not hit it too far or come up short, your ball should feed toward the hole: 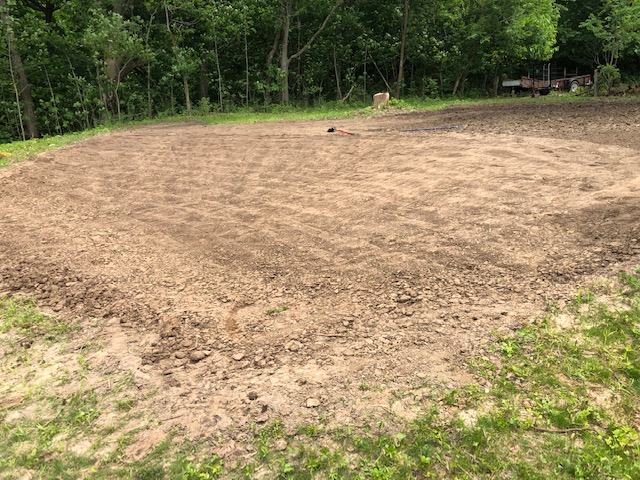 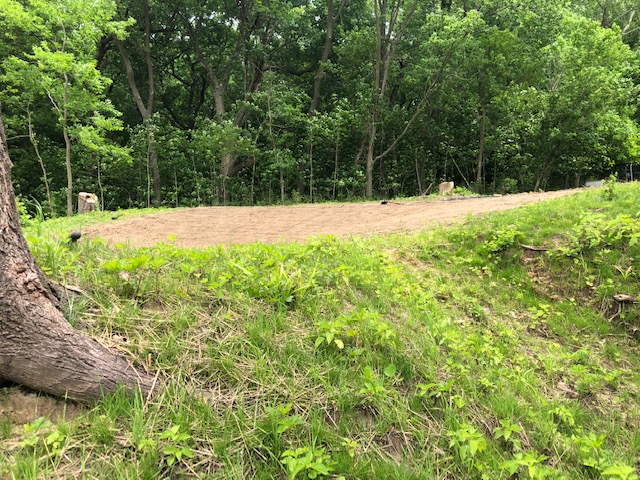 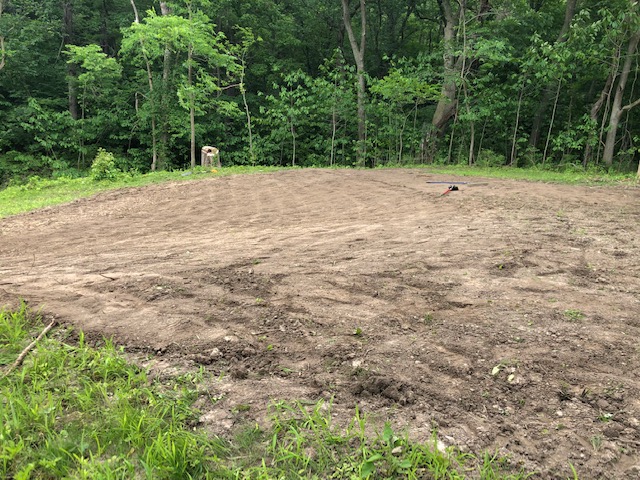 Had to snag a picture of the Road Hole through the trees from 6 green. It looks exactly how I had envisioned it: 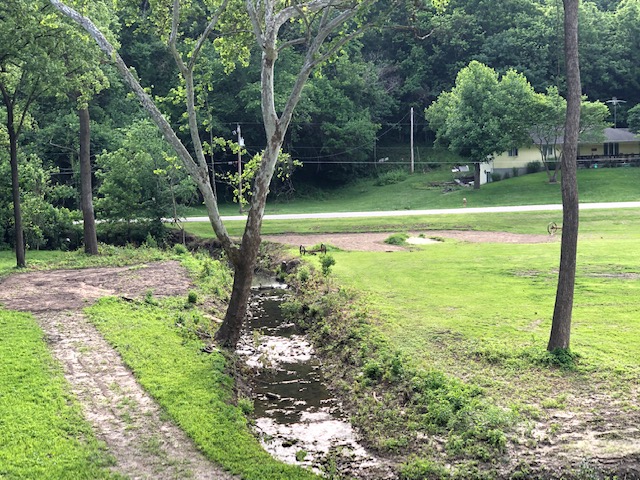 Really really proud and impressed with the boys this weekend. Saturday was hot as hell and we still logged 6 hours of work a piece. Sunday wasn’t as hot but this work gets exhausting. It was 4:00PM, 5 hours in, and we had not had lunch yet. Just finished raking and finishing the 2nd green of the day with three more looming. It would have been natural to throw in the towel then. We took a break and got hydrated and fed. Everyone got right back to it which ended up seeing us finish shaping and finishing all the greens.

We celebrated by installing cups in all the greens and playing a round of dirt golf. First time putters have ever been used at BCN. 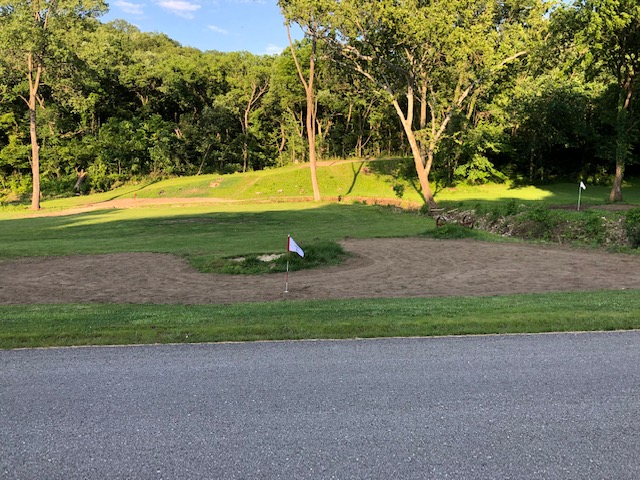 Guy’s – it was so good. Like so so good! Totally different then playing the concepts. We were able to play our single ball through all the holes off packed ground (on a mat) to holes in the ground. Truly a treat. Could have played out there all night. The legs and core were barking though and it was time to go home.

We logged 60 hours of work this weekend. It was hard. It was also the most rewarding weekend at BCN to date. We are ready for the next and final step.